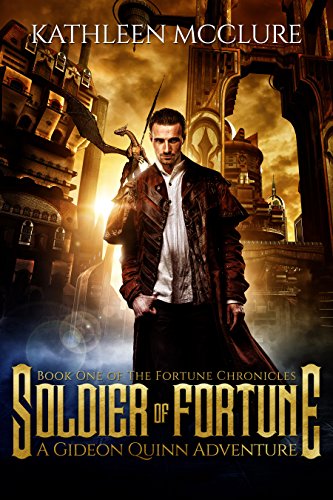 Gideon Quinn has been an orphan, a dodger, a soldier, and a convict. The last thing he expected to be was a hero.

Wrongly convicted of treason, Gideon Quinn has spent six years harvesting crystal under the killing suns of the Morton Barrens, until the day a general of the Colonial Corps arrives with an offer of freedom—and a chance to clear his name.

Gideon doesn’t have to think twice. He takes the offer, and with Elvis, his pet draco, on his shoulder, takes ‘ship for the city of Nike in search of revenge… and justice (but mostly revenge).

What he finds is a dodger named Mia, a city steeped in corruption, and a menace buried deep at the heart of the Colonial Corps.

Now Gideon only has to survive long enough to uncover the real traitors, before they can bring Fortune’s new and fragile peace to an explosive end.

What readers have to say about Soldier of Fortune:
Amazon Reviews:
“Fun, fast read that “has it all” — enjoy!”
“Gloriously entertaining…”
“This is my third or fourth time reading this story and I still love it!”

Goodreads Reviews:
“This book was a welcome surprise.”
“… a delectable mind feast that touches your inner core as well as teases the edges of the imagination.”
“Highly recommend for sci-fi and mystery fans.”