The National Book Critics Circle is a nonprofit organization of more than 600 critics and book review editors. 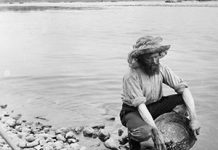 Publisher moves up release of book by Trump niece

Reader Review: “The Other Passenger”