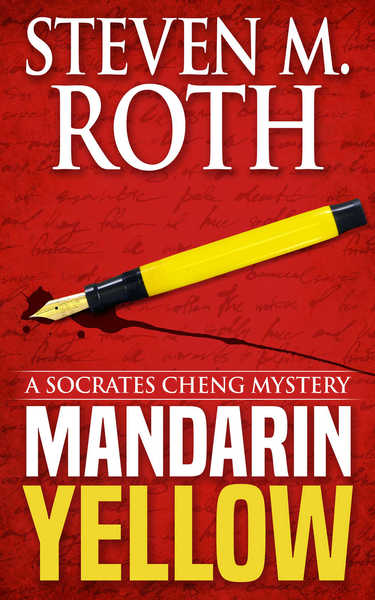 Conspiracy, the theft of a valuable historic object from a Washington, DC art gallery, suspense and murder — It’s all here in this mystery whose roots go back to World War II in China, and come forward to modern-day Washington and its Chinatown.

Why would a burglar break into a Washington, DC art gallery and steal an historic fountain pen worth $2200, but leave behind other art and cultural objects worth tens of thousands of dollars each? And why would someone else later commit murder to protect the burglar’s secret?

These are some of the questions that confront Socrates Cheng — an American of Chinese and Greek heritage — in this intricate murder mystery as Socrates investigates the burglary and attempts to recover the pen, all in an effort to curry favor with his lover’s estranged father who is the leader of a Washington and Shanghai based criminal Triad.

In a search that takes him from Georgetown to Chinatown and elsewhere in Washington, Socrates finds himself threatened, physically assaulted, suspected of having committed murder, jailed for a time, and constantly confronted by conflicts arising out of his three disparate cultures. Yet he is neither daunted nor deterred by these obstacles. Instead, Socrates draws upon his deep knowledge of vintage fountain pens, Chinese history, and the Mandarin language to puzzle out the complex motives behind the burglary and murders, until he finally uncovers the identities of the criminals and makes a discovery that forever changes his life and the lives of everyone else involved.

Mandarin Yellow is an intelligent mystery that sometimes is funny and sometimes sad, occasionally is irreverent, and always is suspenseful. Mandarin Yellow will appeal to readers of modern noir murder mysteries, to collectors of vintage fountain pens, and to people interested in the culture and history of 20th century China and in the Chinese experience in modern America.