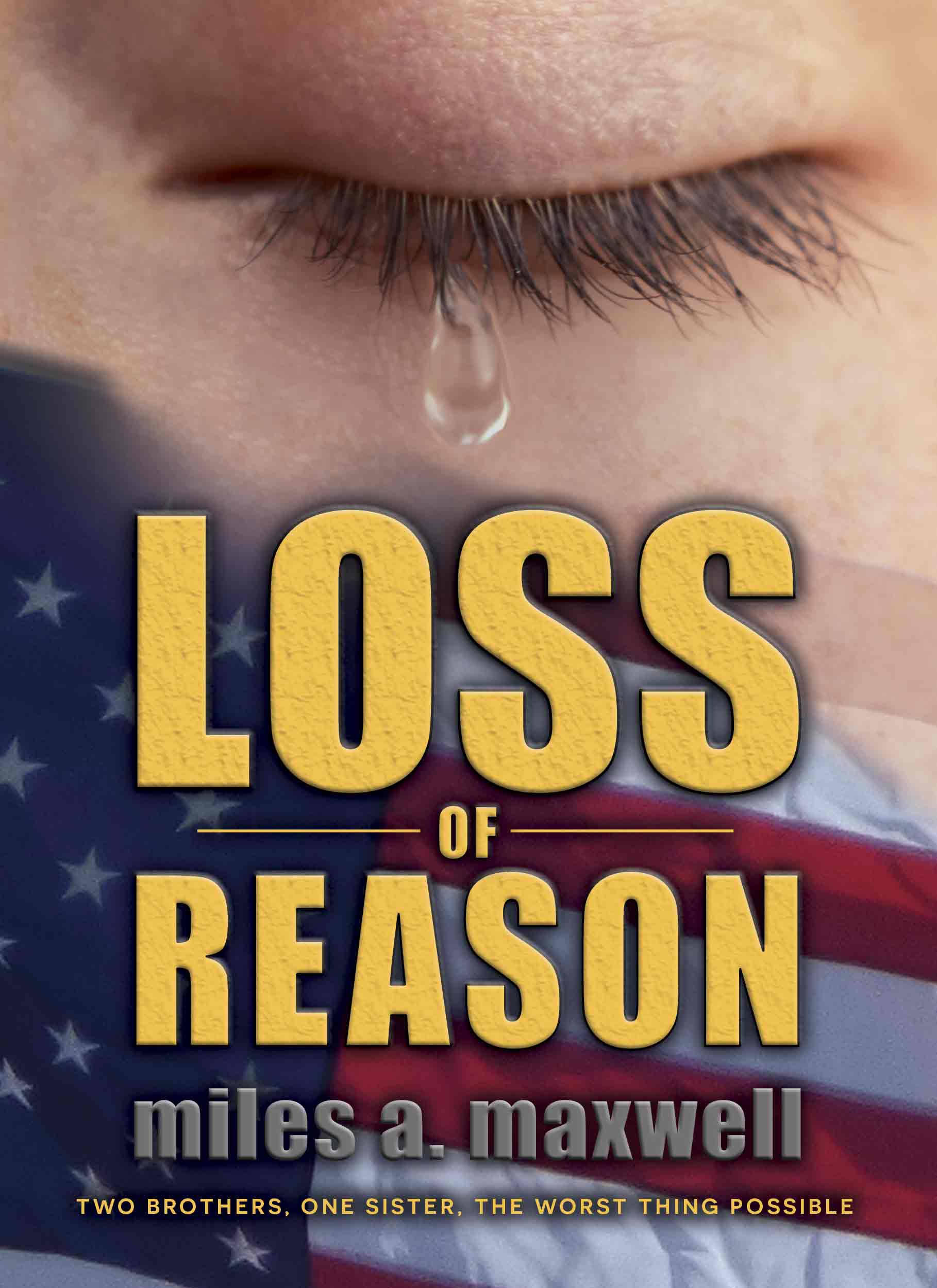 One Of The Most Disturbing Stories You’ll Ever Read

A nuclear bomb is detonated in New York. Banker, wife, mother, Cynthia lives in New York. The military has quarantined the city, its bridges and tunnels destroyed or blocked. Easterly winds have forced the bomb’s radiation cloud out over Long Island. But the wind is about to change.

Franklin climbs mountains and truly understands people. Everon can fly anything. And Cynthia’s brothers are determined to find her. If it were your sister, what would you do?

A ripping good tale of how intelligence and determination can overcome the near-impossible — and the true price of altruism.

Cynthia Reveal held onto her brother Everon a little longer than usual as they said goodbye. She watched him turn and wave with that ironic smile, then a moment later disappear into the terminal where his jet was parked. Why did she have the strange feeling —
She shook it off. He’ll be fine.

Cyn slid into the corner of the back seat as her cab pulled away from the curb at Kennedy and tried to ignore the annoying squeal beneath the reggae coming from the radio. A streetlight’s sudden illumination reflected her worried bright-blue eyes in the window. Her palm ran across the brown leather briefcase on her lap. Should have told Everon about the report. But he was so excited, the new jet. Then he was on the phone. And I wasn’t sure I wanted to say anything anyway. Maybe he hasn’t left yet. She pulled out her phone — And hesitated. No — Franklin! That’s who I should talk to about it. I know something terrible’s going on at the bank. His church — She frantically dialed her younger brother’s number.

A fast busy. She tried again. The phone lay there dead against her ear. She checked to make sure it was working. Cynthia had her boss’s home number on Long Island — She stopped. Put the phone down. I’m being paranoid. First thing tomorrow morning.

As they turned onto the Belt Parkway, the driver twisted the radio dial back and forth and the squeal just got worse.

“What is wrong with your radio?” She couldn’t take any more. “What’s with that sound?”

The radio cut off.

She’d be home two hours later than usual tonight and Steve would be waiting. She dialed his number. After a single ring the damn thing disconnected. She tried him again, watching the lighted windows of Brooklyn, the Parkway high-rises set so close together. On their way to the airport, Cyn’s older brother had once again suggested they escape “this claustrophobic mess —” as Everon put it. If only I could talk Steve into packing up Melissa, all our stuff “— and just get the hell out.” The phone disconnected a third try. She gave up.

Unlike Everon, her own work would have to be near a major city. Vegas can’t be all that much better, can it? The pay would be less. She’d seen those tract homes on top of one another. The small lots — your neighbor’s late-night trash-to-the-curb excursions waking you up. Just like here in New York. Maybe there’s a place for us around Spring Valley. Maybe I should talk with Grandma Del . . .

She found herself jerked awake in a traffic jam. What the hell? Central Park South? They were blocks off the usual route, what she owed on the cab’s meter way up — going east in front of the New York Plaza.

“Sorry. I had to go around. Construction.” Another taxi driver, head out the window, screamed at the car blocking their path, motioning with a hand gesture rude anywhere but New York City. Horns honked uselessly.

Cynthia angled her watch to the light. Seven-thirty? If we could just go somewhere like the little town where Franklin lives — a quiet place without all the damn traffic and taxes and rules and frustration — She sighed and looked up at the flags on the big old hotel waving in the cold winter air, white flakes coming down. Guys in chocolate overcoats escorted blondes and brunettes into other cabs, probably going to restaurants or movies or the ballet at Lincoln Center, Manhattanites feeling the excitement of another Monday evening. The air covered them in giant dandruff, February’s first snow. In less than an hour none of it would matter.

Something passed Penobscot — the Coast Guard cutter assigned to break ice and patrol the harbor waters. The sonarman scored a tiny blip on his scope. Recorded electronically for eight seconds, it just as suddenly disappeared. It moved so slowly, the cutter’s computer-aided sonar classified the blip as BIOLOGIC — an aquatic vertebrate — and removed it from the screen.

Ever since 9/11, one cutter or another was always on patrol in New York Harbor. Time heals all wounds though, a scab never as motivating as open flesh — and the sonarman too, discounted the blip as the movement of a very large fish. Erased it from his mind. Penobscot continued north.

The fish swam silently past two small private boats, moved beyond the Statue, halfway between Liberty and Governors Island, swung east of the Hudson River. And northeast into Upper New York Bay.

When it reached the triangulated center of three transmitter signals — the fish swam faster, rising upward. As it crested the surface, a valve opened. From a chamber inside, not unlike a long scuba tank, highly compressed air blasted through a nozzle in the fish’s tail. It rocketed above the surface.
For every foot gained, its potential was multiplied.

A little girl in a party hat, on her way to celebrate her eighth birthday, a dinner visit to the South Street Seaport, held her mother’s hand as they walked along the pier toward the bay.

As the fish reached the zenith of its arc, opposing charges in its belly imploded toward each other at high velocity. Eighteen nanoseconds and it all became nothing more than a ball of pure expanding energy.

On the Upper East Side, a siren like the lone wail of a coyote echoed through some distant concrete canyon, filtered through Steve Montrose and Cynthia Reveal’s barely open window. Several car horns seemed to blare in answering conversation.

Probably blocks apart, Cyn thought. But she left the window open. She liked a little fresh air getting back to the bedroom at night. The horns, the siren faded, and from the bedroom there was the faint sound of the jazz station she liked. Not clear though. That same annoying squeal all but blotted out George Benson’s light guitar.

“What’s wrong with the radio?” she called softly.

“I don’t know, hon,” Steve’s voice drifted back. “It’s been like that all night, all up and down the dial.” The radio cut off.

She slid everything in her briefcase into the mess of an open drawer, second from the bottom in a black file cabinet covered with colorful plastic flower stickers. Out of sight, out of mind. There was no way she was going to talk about it with Steve tonight. The flowers had been Cynthia’s idea of sprucing up their office-nursery until they could find something bigger.

She turned and leaned over the crib that held their baby daughter and kissed her sleeping girl goodnight. In the dim light she was surprised to see Melissa’s bright-blue eyes looking up at her. “Guess I’ll get that drawer straightened out when you wake up tomorrow,” she whispered. “Nighty-night, sweet girl.” She stroked Melissa’s hair as her eyes closed and kissed her again.

Cyn kicked off her walking sneaker as she hopped to the bedroom. She loved the feeling of getting out of sweaty socks at the end of a long day.

“Oh, I thought for a minute you were going to bring her in with us,” Steve said. He’d just begun his own three months’ leave as hers ended.

She slid off her pants, laid them over the arm of the chair, removed her jacket, blouse and underwear, laid them neatly with the pants and slid in nude next to Steve in bed. Pulled the sheets, the bright Aztec blanket up to her chin. Fortunately that sound on the cab’s radio didn’t seem to be affecting the TV. Cyn affectionately rubbed the instep of her right foot against the smooth skin of her Stevie’s left ankle. Their favorite comedy was just starting.

“Of course. He said to tell you hi. He seems happy, his plant’s expanding again.”

“You okay?” he asked. “You seem kind of somber tonight.”

He yawned, his foot traveling playfully up her leg. “I was thinking . . . think we oughta go shopping for a bigger bed?”

“Oh, I don’t know,” she laughed and kissed his neck. “This old double may be small, but there are compensations.” She rubbed his left foot again. They’d been lazy about it — putting it off.

Cynthia turned her head. “Do you hear that?” Time. Slowed. Down.

Off in the distance, what seemed like somewhere south, two sounds blended into one — both coming at the same time: one low and growling; one high, like the howling whining wind of a hurricane. They turned — only a confused, beginning fear in each other’s eyes.

Their bedroom faced south. The television sat to the right of the bed on the corner of the dresser. As the first pre-shock hit the building, Steve and Cynthia were drawn to an amazing thing: in the nursery, their three-month-old daughter bouncing high into the air, falling into the open file cabinet drawer beside her crib.

The fireball dwarfed the brilliance of what had been Broadway, fired the nighttime sky beyond the sun. In the first five seconds the shock wave traveled one mile.
By the time it reached East 60th it still moved at the speed of sound.
To those far enough away with time to hear, the maelstrom roared, then sucked all sound to vacuum.

Out Penobscot’s slanting window — as the sonarman tried desperately to cling to anything, a bulkhead, a doorway — he watched the horizon tilt. The cutter’s stern rose like a surfboard on a cliff of water, straight at the George Washington Bridge. And then the nose dropped.

Straight down the face of the cliff.

Of the people in Brooklyn, Queens, Staten Island, Jersey City, Long Island City, especially Manhattan, no one had time to think about getting their car out of the parking lot to somehow make it across the Brooklyn or Manhattan Bridge and out into Long Island. Those bridges were disintegrated within moments of that sound.

No one had time to consider getting a cab to take them through the Lincoln Tunnel. Giant balls of fire blew through all the tunnels within moments of that sound.

No one had time to take their money out of the bank — or to convert it to gold — or to think about what to wear — or to decide what groceries to buy for their future survival . . .

Within moments of that sound, chunks of building from the other side of 60th blew through Steve and Cynthia’s bedroom wall to join those of their neighbors on the north side of the alley, dominoing on uptown toward Harlem —

Though the firestorms would burn on for hours, most of said destruction took place within moments of that sound. There was worse to come.