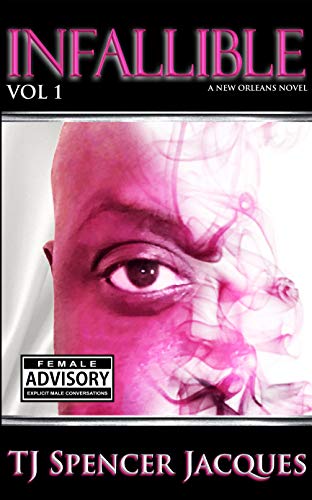 Five men who share one major flaw: an appetite for mistresses. Infallible is about five gamers in their late thirties who come together every Thursday night for a John Madden Football tournament. This weekly event is hosted and narrated by an older guy they refer to as Uncle Glenn – the sixth member of the Madden Night crew. Once Uncle Glenn’s wife departs for her regular Thursday night shift, the crew arrives to smoke the most potent weed in New Orleans, roast each other into knee-slapping laughter, and swap strategies of how to cheat and not get caught. Uncle Glenn loves their company, even though he’s happily married and faithful to his wife, Diana.

Infallible is all laughs and giggles until Diana discovers her husband is hanging out with five cheating, lying, creeping, baby-making, narcissistic assholes—that’s when she tears her husband a new asshole. Uncle Glenn is left with a choice: quit his friends or challenge his friends to be Infallible – to commit to one woman. This novel may require a warning label because the pages are abrasive and embedded with conversations that were never intended for female ears. Infallible also details the reactions of the unfortunate women who discover they have ‘sister wives’ on the other side of town.